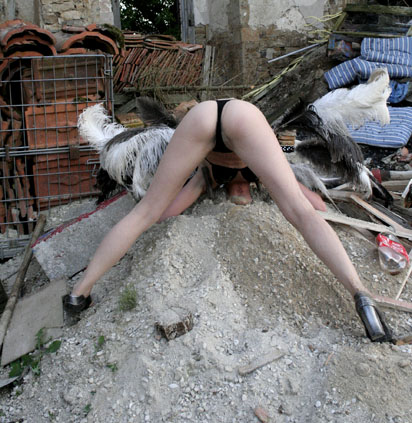 In the contest to mystify what is at least for this worker bee the self-evident object-cause of mass killing—namely, the happiness of a warm gun—Professor Wampole’s latest foray into social criticism at The Stone really takes the cupcake.

At first I thought that conventional wisdom—call it “Facebook psychology”—was generally divided into two (maybe three) camps. On the one hand, there are those who blame the mass media, either the reporters for sensationalionizing the event (thereby turning it into a non-event) or the culture industry for its representation of violence. On the other, there are those who blame inadequate access to something vague like “mental health care.” A third possibility is inadequate “gun control,” which, to my mind, is just as vague, a political cipher that falls more or less into the same camp as “mental health care” (but more on this below). (Yes, I’m leaving out of this picture what passes for conventional wisdom on the right—the teachers didn’t have the guns to defend themselves—but I think the best response to that is silence of the Proposition 7 variety.)

“Limiting access to weapons is certainly a pragmatic albeit incomplete solution to the United States’ propensity for murder. However, were the guns to vanish instantaneously, the specter that haunts our young men would still hover in silence, darkly.”

What’s insidious about this assertion is that it is cloaked in all the demystifying garb of your standard ideological argument. Taking a cue perhaps from Hanna Rosin’s recent The End of Men: And the Rise of Women, which one Time’s book reviewer describes as “carelessly apolitical,” Wampole diagnoses a structural, or as she calls it “subconscious,” problem—the “decline of the white male.” Since most of the mass killers happen to be middle class white males, it would then make good sense to assume that it must be a symptom of their fall from social power. As anecdotal evidence, Wampole introduces us to her poor white family in Texas, a “region” where all the women, despite being mostly single moms, are doing “O.K. in the end,” but where all the men abuse “drugs or alcohol” and spend time in prison. “If this pattern is not familiar to you personally,” she assures us, “I am certain it is the lived experience of someone you know.”

Thus Wampole at her most succinct: “The angry white man has usurped the angry black man.”

Now the problem here is not merely that the core of Wampole’s argument is militantly counterfactual. According to the latest DOJ statistics, while the current homicide rate among non-whites is a little more than seven times that of whites, the overall trend is that violent crime in general has fallen dramatically over the past two decades. The real problem is that Wampole’s understanding of the event actually partakes in the same logic as those previous types of left conventional wisdom. Let us recall for a second the structure of Poe’s “The Purloined Letter,” in which the Prefect of police assumes that the Minister must have hidden the letter someplace in his apartment—everyone understands that the letter, much like a firearm, is useless if the Minister doesn’t have it ready-to-hand and would leave the Minister impotent if it ever were used. After searching the Minister’s apartment from top to bottom, the Prefect has come up with nothing and thus seeks out Dupin, Poe’s great solver of enigmas, who understands that the secret of the purloined letter is that the Minister, following the path of the signifier set by the Queen, has hidden it in plain sight. As Lacan puts it in his seminar on the story:

“In order to grasp in its unity the intersubjective complex thus described, we would willingly seek a model in the technique legendarily attributed to the ostrich attempting to shield itself from danger; for that technique might ultimately be qualified as political, divided as it here is among three partners: the second believing itself invisible because the first has its head stuck in the ground, and all the while letting the third calmly pluck its rear” (The Purloined Poe, p. 32).

At first, we might be tempted to say that Wampole is a lot like the Prefect with his head in the sand, missing the simple fact that, as I perhaps too casually stated earlier, the purloined letter structures the subject in the same way that possessing a gun does. (Along these lines, Dan Baum’s “Happiness is a Worn Gun” remains one of the most insightful essays about guns ever written.) At the same time, Wampole understands this, but in paying attention only to the congenital political blindness around her—fetishizing, as it were, the ordinary, the perennial poor white’s complaint of being, in Dylan’s words, “only a pawn in their game”—she misses the real force of her argument, which is precisely that a gun is a concrete representation of the phallus, perhaps its earthly representative par excellence.

This is why metaphysicalvillain’s Adorno quote comes off sounding so psychopathic. A most doctrinaire Marxist in the end, Adorno fails to see the link between surplus-value and surplus-enjoyment, and thus further confuses the machine’s production with its consumption. As he goes on to say in that same section of Minima Moralia: “not least to blame for the withering of experience is the fact that things, under the law of pure functionality, assume a form that limits contact with them to mere operation, and tolerates no surplus” (40). No doubt Adorno pierces through the veil of experience here, but it is the very impotence of ideological critique—of catching a glimpse of the Real, i.e., “the vermin of the street,” while being unable to do a damn thing for them—that leads Adorno to imagine the bottomless irony of vehicular homicide. There is a purity to this kind of negation that would seem to negate even the death drive itself, a place where even those of us who sense the all-too-human limitations of jouissance—what Lauren Berlant has called its “ambivalent whiplash”—realize that in the end it’s all we’ve got in this life (and as Fifty Shades of Grey teaches us, we may as well enjoy its sting). And yes, I am suggesting that mass killers do probably glimpse the Adornian truth of things as at least one condition for pulling the trigger (and this is why Wampole’s call for empathy is best used as an engine for new legislation, rather than a psychologistic imperative).

Much closer to the mark on this point is Nabokov’s high-and-dry Humbert Humbert, contemplating murdering his Doppelgänger, Claire Quilty—a name that practically invites unveiling—the real and for that reason only possible corrupter of Lolita. Observe him in his final encounter with the now-grown-up nymphet, just prior to the novel’s denouement: “I could very well do with a little more rest in this subdued, frightened-to-death rocking chair, before I drove to whatever the beast’s lair was—and pulled the pistol’s foreskin back, and then enjoyed the orgasm of the crushed trigger: I was always a good little follower of the Viennese medicine man” (274).

Nowhere is Nabokov more Freudian than in his moments of disavowal, a technique that only serves to transport his imagery to the laws, if not the very limit, of signification. For if Lolita is anything beyond the pale quiver of Humbert Humbert’s fantasy, she is the culture industry. Like Adorno—who could never rid himself of his bizarre latent class subjectivism—Humbert Humbert’s answer to the problem of mass culture is to retreat into the nymphet kingdom that is High Art. And this, I want to claim, is part of a much broader post-1945 trend to transform complicity into something like resigned connoisseurship. But what looks like a willful projection of bland android-like critical distance in Adorno is for Nabokov’s alter ego something much more affecting: actual enjoyment. The oscillation between enjoying and failing to enjoy—given voice in his only real encounter with Lolita, the scene of her “oh, no” with a “sigh to heaven” (285)—is where the true pathos of Humbert Humbert resides.

And I think this leads us back to Professor Wampole, the link between her current essay and her previous one on the hipster. What is unbearable for Wampole (and most of her academic ilk) to imagine is that anyone could actually derive a dialectic of enjoyment from popular culture. More specifically, we could say that she is correct that gun violence, especially the genre of mass killing, is a product of males “in decline”—not just white males, but all males. And not just historically, but transhitorically. For being “in decline”—the illusive reverse of Bach’s endlessly rising canon—is what it means to be male, from Napolean to Woody Allen. As a consequence, male desire ceaselessly turns around the maypole of object a, as we see in just about every scene of “Love and Death”:

The obverse of Wampole’s argument would need to account for what has emerged as the most horrific genre of female violence, the Casey Anthony who murders her children (often by drowning). But I’ll leave that for an analyst more equal to the task of sexuation.

In the meantime, I think I speak for the Hive in offering a political prescription: in lieu of castration, confiscate the fucking guns. All 270,000,000 of them. Pace anti-orpheus, I do think that living under liberalism entitles us to a fuller experience of the every day, a radical ordinary that is capable of rupturing ideology rather than constantly being undermined by it. This lies in the discovery that sometimes all you have to do is see what is staring you plain in the face.