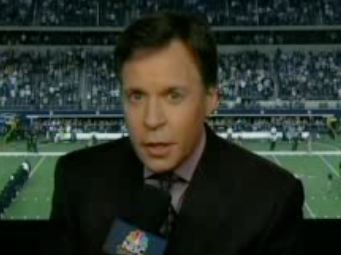 In an op/ed titled “‘Gums’ control for Bob Costas,” a piece written prior to Friday’s mass shooting, sportscaster Mark Rosen criticized his better-known colleague for a segment aired on Monday Night Football following the Jovan Belcher murder-suicide in which Costas firmly asserted the necessity for gun control.

“I read about, hear about, write about, talk about and think about politics for much of my waking — and oft-times sleeping — hours,” wrote Rosen, “Sunday Night Football on NBC is a time to get away from that for me and 20 million other American viewers. It’s an NFL sanctuary. Sportscaster Bob Costas stirred a national controversy when he violated that sanctuary to comment on the suicide of Kansas City Chiefs linebacker Jovan Belcher…It was annoying and inappropriate.”

Mark Rosen is a part of the problem. His reference to Monday Night Football as a “sanctuary,” is not just “annoying and inappropriate,” it suggests the same consecrating attitude towards sports institutions that allowed the atrocities at Penn State to take place repeatedly over several decades without intervention. But there are broader and more troubling principles underpinning Mr. Rosen’s ire.

The notion that one is entitled to ritualized spaces of psychological isolation from unsettling “real world” events is deeply woven into the fabric of “ordinary,” socio-economically secure American life—indeed, it may well be the sine qua non of the ideology of the “ordinary” itself. This regime of entitlement, foundational to suburban existence, feeds a project of empathic divestment that greases the gears of the western war machine and its profiteers and figures centrally in the technocapitalist conspiracy to transform the children of the twenty-first century into affectively conditioned test subjects in a digital age Pavlovian laboratory. (The true eventuation of the ‘Becoming-Animal’ misguidedly envisioned by Deleuze and Guattari, at the cusp of the personal computing era, as an emancipatory proposition is the subject subsisting permanently within the intermezzo of the technological apparatus.) It is only when such currents manifest themselves locally, as in the tragedy that occurred yesterday in Connecticut, that the cycle is momentarily interrupted before being re-subordinated to the spectatorial anesthetization that inevitably ensues in the wake of what are thereby rendered non-events.

If there is a cruel fortuity to the close succession of recent nationally visible gun tragedies perhaps it is in the conversation having finally directed itself, in acknowledgement of a long-disavowed repetition compulsion, to the mechanisms of temporalization that allow disavowal to continue unabated. In this sense, Costas demonstrated foresight and courage not for breaking out of the narrow definitions of what constitutes sports reporting, nor even for profaning the sanctity of a cherished American institution, but for reminding us, in the too-soon-ness of the moment, of our propensity for staying the same. Traumatic events are too-frequently assimilated by the neoliberal subject according to a sacralizing convention whose deleterious effects are felt from Newtown, Connecticut to East Jerusalem.