MJ’s Hall of Fame Speech: From Force to Farce 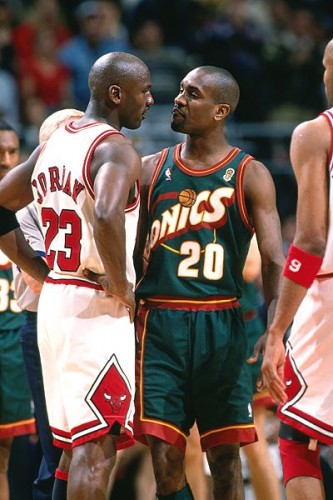 This isn’t exactly topical, since Michael Jordan gave his infamous Hall of Fame speech over three years ago. But while reading an article about Nietzsche’s critique of the liberal conception of freedom, I think I began to understand exactly why MJ’s vindictive and petty speech came off as not only, well, vindictive and petty, but also pathetic and farcical. The connection may seem at first glance a little ridiculous, but I think there’s something here.

The liberal conception of freedom is primarily a negative one (paradigmatically espoused by JS Mill): freedom consists merely in the absence of any constraint or coercive force. By contrast Nietzsche sees the will as essentially bound up with the overcoming of constraints and obstacles. Further, the will can be conceived as self-overcoming in the sense that it posits its own possible limitations in order that it may surpass them.

During his remarkable basketball career, MJ was famous for not only interpreting other players’ comments, gestures or actions as insults, but actively imagining that they were insulting him. He made psychosis productive. For MJ, “playing his hardest” wasn’t good enough; he had to compulsively generate targets to destroy. In addition to his considerable talent, this excessive will is what made MJ an otherworldly athletic force. As the sportswriter Bill Simmons has observed, he was constantly engaged in this sort of self-deception, imagining his opponents as hostile and cocky antagonists that he could not only beat, but thoroughly humiliate.

MJ’s speech manifested this same kind of vindictive fantasy—a fantasy that made his vindictiveness possible in the first place. On an occasion calling for expressions of gratitude and joy, he repeatedly singled out people who “underestimated” him or trash-talked him. Many wondered what his motive was for doing this. A lot of commentators got it right: this was just MJ doing what he’d always done. He was once again fashioning villains out of opponents to fuel his will.

The speech made many people angry, or in any case, reaffirmed their impression that MJ had always been a jerk. But I think what’s interesting about the speech is that the habit of self-deception (the paranoid attitude that the world was against him) had obviously outlived its usefulness. In his late 40s, the retired MJ no longer had the physical prowess to materialize his will in any relevant way. The speech struck me as a sad yet comical spectacle, hardly something that ought to induce outrage. Rather than condemning MJ from a moral perspective, then, I think the proper response is to understand the psychology of obsolete viciousness.