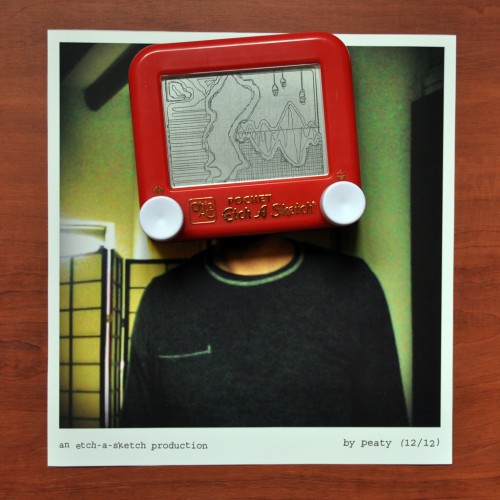 A couple minutes after I closed my eyes last night, hours before I fell asleep, I was given the chance to find, among a crowd of people, the “woman of my dreams” (as long as we agree this is only a phrase of speech). This parenthetical is necessary because the whole riddle of this daydream centered around the inability to manifest desire in form.

I may have been at the mercy of other forces, specifically the influence of an online journal called Plain Honey wherein a Peaty updates a blog called Etch-A-Sketch with, how do I say this, “weird images” digitally rendered into a digital image of this famous device.

For a moment, in the room, there was all this vibrancy and I thought I was about to stumble upon ‘her’, but then everyone I faced had an Etch-A-Sketch face—I mean literally their faces were square and had knobs. And it was such a sudden shift, one where this seemingly great opportunity became the judgment: you will never be able to animate the face you want. So that everyone in the room remained blurry, incoherent, and though the vibrancy and color and music remained, there was nobody there I wanted to talk to. And I didn’t even try to fuss with any knobs—I somehow knew the proposition would end in all these squiggly lines.