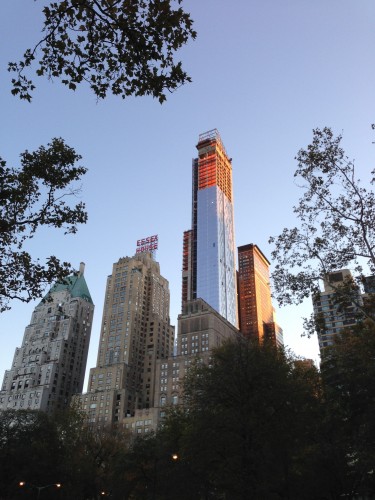 They broke their backs lifting Moloch to Heaven! Pavements, trees, radios, tons! lifting the city to Heaven which exists and is everywhere about us! 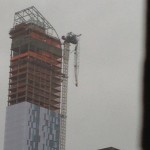 In the midst of Cyclone Sandy’s assault on the Eastern Seaboard, a fifty-ton crane attached to the top of One57—a building slated to be the tallest  residential building in Manhattan—partially collapsed under the storm’s powerful winds. For several days it dangled precariously over 57th street, forcing the city to close off and evacuate the surrounding area. It has since been tethered to the side of the building, allowing the street to re-open. Many residents, however, have yet to return to their apartments.

One57 was a monstrosity well before it became a source of imperilment to thousands. As the salesperson in this promotional video masquerading as an editorial brags, the building’s 90 stories dwarf anything in the nearby vicinity:

Viewed from Central Park, One57 towers above the buildings along Central Park South like a gigantic blue-green Pez dispenser dealing sugary square feet of prestige to the high priests of Moloch. What better symbol of the misguidedness of acquisitive desire and phallic pomposity than a mangled, detumescent appendage dangling from the thousand foot tall skyscraper’s penthouse?

One57 stands nearly two-hundred and fifty feet taller than neighboring Carnegie Hall Tower, the building previously holding the distinction of being 57th street’s greatest offence to the New York City skyline. Based on a 1987 design by World Trade Center architect César Pelli, that building’s stuffy brick exterior and anachronistic details pay superficial homage to the actually load-bearing masonry of the venue it is named after. Carnegie Hall Tower’s sole purpose appears to be to nurture the Gilded Age nostalgia of millionaires witless enough to be lured by a building that advertises itself on its homepage as “A SYMBOL OF SUCCESS.” 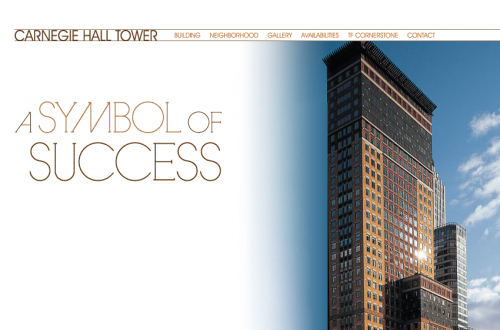 But while One57 has appropriate company in Carnegie Hall Tower, its loathsomeness far exceeds that of its smaller neighbor.  Multiplying the inflated market value of One57’s apartments (the most expensive of which are priced at around $100 million) by sheer architectural misguidedness, one comes out with a figure surpassed only by 15 CPW, the one building in town that could make its neighbor, Columbus Circle’s Trump Tower, the architectural centerpiece of Hollywood’s repackaging of 99% discontent, seem déclassé by comparison. Dubbed “Jesus in Limestone” by real estate insiders, 15CPW (foreground below) was designed by architect Robert A.M. Stern. 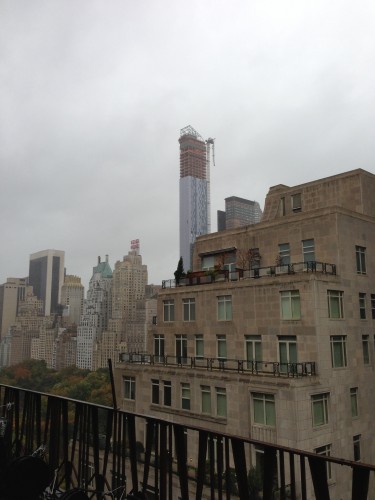 A shameless peddler of suburban taste for urban dwellers, Stern is known for contributing to the Disneyfication of Times Square, blighting a number of street corners in uptown Manhattan, and serving as the head of the Yale Architecture school, where he has garnered a reputation for discouraging thought that conflicts with his own traditionalist leanings. Having designed the master plan for Disney’s Celebration village, Stern was an obvious choice for lead architect of the first library for an illiterate president: the George W. Bush Presidential Library and Museum at Southern Methodist University in Dallas. Situated at the edge of a major freeway and across from a strip mall, the project promises to be yet another multi-hundred million dollar architectural turd in the manure cart that is Stern’s resume. Here is the LATimes reviewing Stern’s plans and finding them failing to measure up even to the exceedingly low standard set by Dubya himself.

Astonishingly, unlike 15CPW, One57 was designed by an architect not only of actual talent but of what might once have appeared to be conscience. Christian de Portzamparc, the first French recipient of the Pritzker Architecture Prize, professes a longstanding commitment to conscientious urbanism and to honoring the interrelation between ethical and aesthetic practices. His website makes proud mention of research carried out during the 1960s on “the social aspirations and quality of life in the large scale urban developments of that era” while highlighting his track record for projects that are “woven into the urban fabric, transforming a site rather than denaturing it.” Nothing could be further from the case when it comes to One57, which has not only denatured but also depopulated its surroundings within a five block radius. What is more, the building flagrantly violates any notion of aesthetics as an “ethically conditioned” realm. 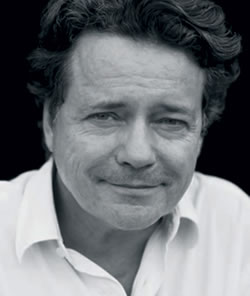 “CdP is concerned with research, he avoids pure speculation. For him, architecture Is concerned with the quality of life. Within this realm, aesthetics themselves are conditioned by ethics, and he maintains that we have too often dissociated one from the other.”

The developer behind One57 is diamond-merchant-turned-developer, Gary Barnett. As numerous recent articles have attested, Barnett epitomizes the greed and fecklessness of high end New York real estate, an industry that comes closer, with each passing year, to rendering the city unlivable for everyone but the super-wealthy. Extell, the company that Barnett heads, has been accused of a wide range of immoral practices, including “tak[ing] food from the mouths” of orphans of 9/11 in their efforts to sell multimillion dollar condos.

Exemplifying the worst aspects of 1% privilege, Extell has tried to use a shady loophole to garner tax-breaks that would give wealthy buyers an incentive to invest in One57’s outrageously priced condominiums. As NBC News has reported, this would mean that owners of 90 million dollar properties could pay as little as 18,400 dollars a years (instead of the normal 200,000+) in taxes on their apartments. That’s 180,000+ dollars per owner not going to things like schools, health, infrastructure, and the massive cleanup that Cyclone Sandy will undoubtedly necessitate. These tax breaks are normally extended to developers who commit to providing low-income housing. The loophole allows developers to benefit from the tax incentives offered to millionaires on 57th street while fulfilling their obligation to the low-income housing stipulation by erecting buildings in the Bronx.

With Cyclone Sandy drowning low-lying parts of Manhattan and turning the island into a tale of two cities—a metropolis starkly divided between the uptown “haves” and the downtown “have-nots”—many New Yorkers, including those of considerable privilege, had a chance to reflect on what it means to live without the basic amenities they ordinarily take for granted. It is unconscionable that close to 50,000 people (a third of them children) should be living in homeless shelters while the super-wealthy—many of whom primarily reside overseas—benefit from tax loopholes and drain the city of its lifeblood.

Halfhearted applause for Mayor Bloomberg breaking ranks with the free market Mitt-ology of his billionaire peers in supporting “that one.” But before New York is completely suffocated under shiny prefab façades, what the city really needs is a representative of the Rent is Too Damn High party.

The endgame of the New York real-estate race is a metropolis stripped not just of everyone but rich people, but of all the things that make any town an appealing place to live in the first place. As it stands, astronomical New York rent prices have already deprived downtown of its last great bookstore, which now hobbles on—at least for as long as its lease-extension holds—a shadow of its former self. It is possible that some of the hardest hit galleries in Chelsea, a neighborhood basking for years in the crepuscular light of cultural decadence, will be forced to close in the wake of Sandy if not in the wake of their 10 year leases. They doubtless won’t be those that make ends meet several times over hawking the second-tier works of certified blue chip artists from the last century. It is a cruel irony that the gallery that appears to have suffered some of the worst devastation at the hands of Sandy recently mounted a show whose message to Chelsea and everything it represents was essentially: I hope you drown in your own sewage. The artist’s name? Flood. 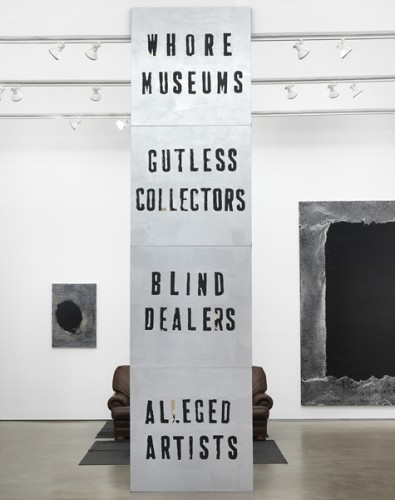 New York in the 21st century is a place where the cops blockade the parks at midnight and the seemingly most principled members of the cultural elite sell their souls to satanic real estate moguls. An air-conditioned nightmare for the privileged few, a miserable toilet for the rest. Literally or figuratively, sooner or later, everything becomes a Starbucks. 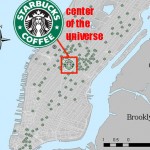 What sphinx of cement and aluminium bashed open their skulls and ate up their brains and imagination?

Moloch the incomprehensible prison! Moloch the crossbone soulless jailhouse and Congress of sorrows! Moloch whose buildings are judgement! Moloch the vast stone of war! Moloch the stunned governments! 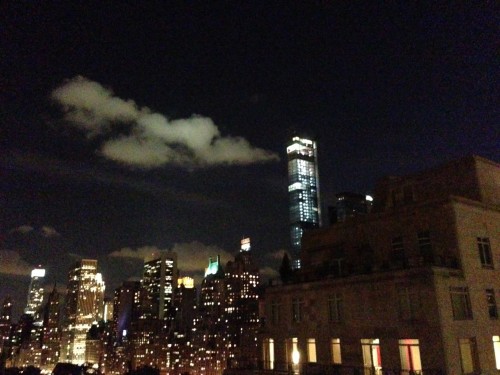